ARTICLE: I Just Made New Characters

This post is a number of things. It's a commentary on diversity arguments in comics. It's an announcement of a secondary project I have in the works. Most importantly, it's a story of how I got into popular culture in the first place.

I was born with problems. I know how sappy that sounds, but I had difficulty hearing and seeing. Low sounds were almost inaudible to me while high ones hurt my ears and fixed objects were often perceived to be moving. Suffice to say, this cut me out of sports and made it hard for me to make friends for quite a while (my Dad even thought I was being rude to him prior to my hearing problem being diagnosed).

So I found myself taking shelter in stories; both print and film/televised. These were worlds that I felt like I had some degree of control in; I felt more able to function in fictional worlds than real ones. It helped that the TV was at just  Being engrossed in these kind of stories left me wanting to contribute to that part of the world in the same way I imagine other young were inspired to take up sport after watching a great sportsman. This lead me to imagine myself into stories and play time often consisted of me making up stories.

My introduction to superheroes came with the Ninja Turtles. I was also introduced to the cutlery draw at the same time, which caused no small level of concern to my parents. Sharp objects + vision problems = potential for much bigger problems. The damage was done however- I loved heroes in masks and nothing could change that. I found myself later introduced to the Transformers, the 90s X-Men and Spider-Man cartoons and, of course, Batman.

So what does this have to do with diversity arguments? Well, so often I hear arguments that changing
an established hero's race or gender is necessary because how else are kids from demographic X going to see themselves as heroes? Brian-Micheal Bendis often shares the story of his adopted son when talking about the creation of Miles Morales. I sorta get the sentiment, but I'm not sure it holds up. I knew I could never be Batman. Batman, for starters, was an American who understood how the world worked, and I was an Australian who could recall being heartbroken because my parents were driving me to Ikea and not Africa.

More importantly, though, Batman was an adult. I was under 10.

So I did something that many who argue against diversity have been demanding for years; I made my own characters- ones that I could see myself in. They were called the Super Kids and they were a cross between the 90s Batman toys and the Power Rangers with Spider-Man-like enemies. I never worked out an origin story for them, but never found myself caring; I became invested in these guys I made what seemed then to me to be elaborate stories for them (the fight between the Orange Super Kid and their enemy The Hawk is a story that stuck with me as a personal epic). This filled the same function for me; it allowed me to see myself as someone heroic even though I wasn't exactly like the people I was reading about and watching.

I made many more superheroes of my own design. Again, this was part of creating a controllable world that had long ago left any control I had over it. But what it means is that I am a firm believer in the "make new characters that fit the demographic.

And that leads me on to the side-project announcement. Because I believe so firmly in making new characters that represent something other than the typical American hero, I'm putting my money where my mouth is. Along with The Caped Crusader, I am making The Great Ghostman; a game about an Australian super hero. I'm not going to give away too many details yet, but see the screens to the side.

As for origins, when Luke Scarce is shot he finds himself getting up and walking again; half-human, half-ghost. He is now able to walk through walls and use telekinesis. But who is behind his
shooting, and why?

For the record, my sight and hearing problems are no longer a concern, through hearing therapy and a time with corrective lenses I have had normal senses since about age 12. The only last effect was a strange accent that when I turned 18, turned out to be rather impressive to girls (and yes, I did think I'd hit the jackpot).

For a long time, The Caped Crusader has been using tiles from the long-forgotten SNES game Live-a-Live.

Now, I've been working on a side-project for a while and I've been making some custom tiles for it. I've started to really like them, and started wondering "why aren't these getting used in Caped Crusader?".

So now they are. See below;

Storyline and hint at characters

Well, I'm up to getting the in-game gameplay done for the demo release. It's a long process, but I wanted to give you that extra little something. Here's some in-game dialogue. 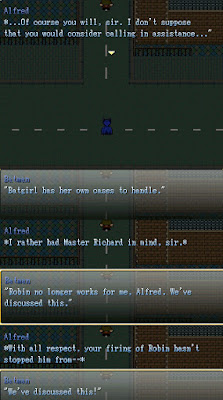 The hero I'm hinting at shouldn't be a surprise to anyone familiar with the Bat-family, but suffice to say, this game's story is going to focus heavily on Batman's allies.
Posted by T Vulture at 22:16 No comments:

I know, it's been a long time since I posted a picture. I have been working on the game, but my day job has made things difficult to get as much done as I would have liked (I'm a teacher, and currently on probation as a new employee- gotta impress to feed my wife and kids).

But a little bit of free time on my hands means that I can post this:


ACE Chemical, the area where meet a far less serious character. I wasn't fond of the way I designed it until I added the graffiti on the walls. I think that gives it just the "Batman" touch it needs.
Posted by T Vulture at 05:47 No comments:

Where does he get such wonderful toys?

Okay, so the reason for the lack of updates...

RPG Maker 2003 is a great program. I've been using it for an awfully long time and I'm pretty decent at using it. But to be honest; I'm forcing the program to do what it isn't designed to do. That means that basically everything is going to be a long process. I'm in the process of making and testing gadgets and programming enemies. Some of this I've done before, but some things currently only work in theory.

That said, I'd like to introduce one of the alternate costumes in the game:

That's right; the Tim Burton Batsuit from the 80s has come to Caped Crusader! This suit will have increased HP, but lowered skill (I mean, you can't turn your head in that thing!).
Posted by T Vulture at 03:56 No comments:

So, trying to test some systems, here's your HUD:

The idea is that while in the Batcave, you pick 4 gadgets to put into your Utility Belt. Those four gadgets can be accessed by using hotkeys.
Posted by T Vulture at 06:44 No comments:

Been quiet on the blog; mostly because I've been working on the finer details of The Caped Crusader. Here's what I have that I can show off;